Accent marks (technically called diacritical marks or diacritics) are symbols that are added to a letter to change its stress or sound.

Diacritical marks serve an important role phonetically: they indicate how a word is pronounced. And a diacritic can change the meaning of a word entirely, as is the case in the words exposé and expose.

So imagine if your last name had an accent and everyone left it out, just because they think it’s unimportant or that no one will notice it’s missing.

As I read articles about Dr. Katalin Karikó in different languages, it seems that only US publications consistently omit the small yet important stroke that indicates the long ‘o’ sound in her last name, a sound unfamiliar to English speakers. The difference between a short and long vowel is important in Hungarian. Omitting the diacritic can change the meaning of a word. For instance, agy means brain, while ágy means bed.

Dr. Karikó‘s research made the first corona vaccines approved in Europe and the USA possible, and yet, as a scientist running her own lab, she was frequently asked for the name of her supervisor, or she was addressed as “madam” while her male colleagues were identified as “professor”. Her experience reminds me of the humiliating journey of the African American women at NASA depicted in the film Hidden Figures, who did the complex calculations that helped send astronauts into space.

Of all the things that occupied Dr. Katalin Karikó while working towards her recently publicized Nobel Prize–worthy scientific accomplishments, the small diacritic that rests on the last letter of her last name was probably the least of her worries. After all, she gave the world a COVID-19 vaccine, and according to Dr. David Langer, Chairman of neurosurgery at Lenox Hill Hospital, she is a “superstar who deserves a tremendous amount of gratitude from us all.” 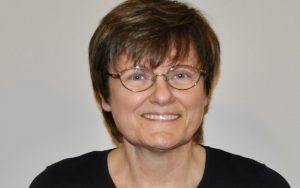 «Having nothing gives you the freedom to be fearless».

International Women’s Day has been celebrating the accomplishments of women around the world for over a century. The global theme this year is Women in Leadership: Achieving an Equal Future in a COVID-19 World.

We are excited to shine a spotlight on Dr. Katalin Karikó, whose passion, resilience and pioneering work could be what saves the world from this pandemic.